Since they launched in 2007, brands large and small have been exploring how to optimise their use of Facebook Pages to build a community, promote news and support customers.

As Facebook has tweaked its algorithm over that time, it’s become trickier to reach an audience with Pages without investing significant budget. That’s partly about Facebook’s commercial strategy, but it’s also a reflection of the reality that getting people to engage with brand pages on a social network was a bit of an odd concept in the first place.

In the meantime, peer-to-peer spaces in the form of Facebook Groups, launched ten years ago this month, have been going strong. If you’re on Facebook and anything like me, I suspect you get a lot of the value these days from the local and interest groups that you’re a part of.

In good times, a Facebook Group can be a rich place to get answers to questions, get feedback from a niche audience – or just get rid of something you don’t need. (I offloaded a hedge trimmer to a neighbour recently in 20 minutes flat.)

Long-term friend of Helpful, Dan Slee has written a great post looking at what Facebook’s recently-announced changes mean for the relevance of Groups to public sector comms teams. As he puts it: “Facebook are putting more emphasis on groups and you’ll see changes in the coming months. If groups aren’t part of your Facebook strategy it even more needs to be.”

Dan himself is a great example of someone who’s been building an engaged community as a Facebook Group, with the Public Sector Comms Headspace group he set up now numbering over 5,000 communicators. I asked the group recently for examples of when they’ve engaged in local Facebook groups themselves, and got some great examples back, some of which I’ve shared with permission here.

Groups in good times and bad

The flip side to niche communities on a private-by-default platform like Facebook is the risk of misinformation spreading and being amplified between like-minded people without being challenged or debunked.

That’s by no means the case in all groups – and in fact, vigorous ‘challenging’ of other members’ views is what takes up a huge amount of group admins’ time, and is one reason why Facebook is trying to add new tools to make moderation and blocking of known-false information easier. But to horribly mangle the classic saying, there’s a risk that a myth or rumour in a Facebook Group can be well on its way to a boycott, protest – or worse – before the truth has got its trousers on and scanned its morning media clippings.

Improving your engagement with Groups

We’ve supported clients both in our crisis- and peacetime-focussed digital strategy to understand how to factor Groups and other niche online communities into their monitoring, engagement and corporate communications work.

Here’s five of the challenges that I’ve seen come up time and again:

A Facebook Page feels much like the corporate website, with design options, moderation settings and a nice clean timeline to fill with on-brand posts. It’s essentially an ‘owned’ space, where you as the host get to say what goes, and – like the good old days of advertising – the more you invest to boost your reach, the greater the audience you can build.

A Group, like most forums, is a space where you have to earn your credibility and attention. Like the social media of ten years ago, it’s more like a pub than a lecture hall: somewhere you can talk to people in small groups on a human level, build up a reputation and status. Put down the megaphone and help people, and you’ll be rewarded with appreciation and their all-too-precious attention.

As a public sector communicator on the Headspace group put it:

“There are an inordinate number of community groups [here] and as the council we’ve joined as many of them as we can. Partly for monitoring as our content was being shared there anyway, but we also publish a lot of content to them too – particularly coronavirus messaging. There are a couple of groups with over 30,000 members so it’s a really good way of stretching your reach to people who aren’t following you or the Facebook algorithm gods decide shouldn’t be shown your content. There is a lot of misinformation bandied about, but it’s also a good opportunity to nip things in the bud and shut down rumours before they get too out of hand.” 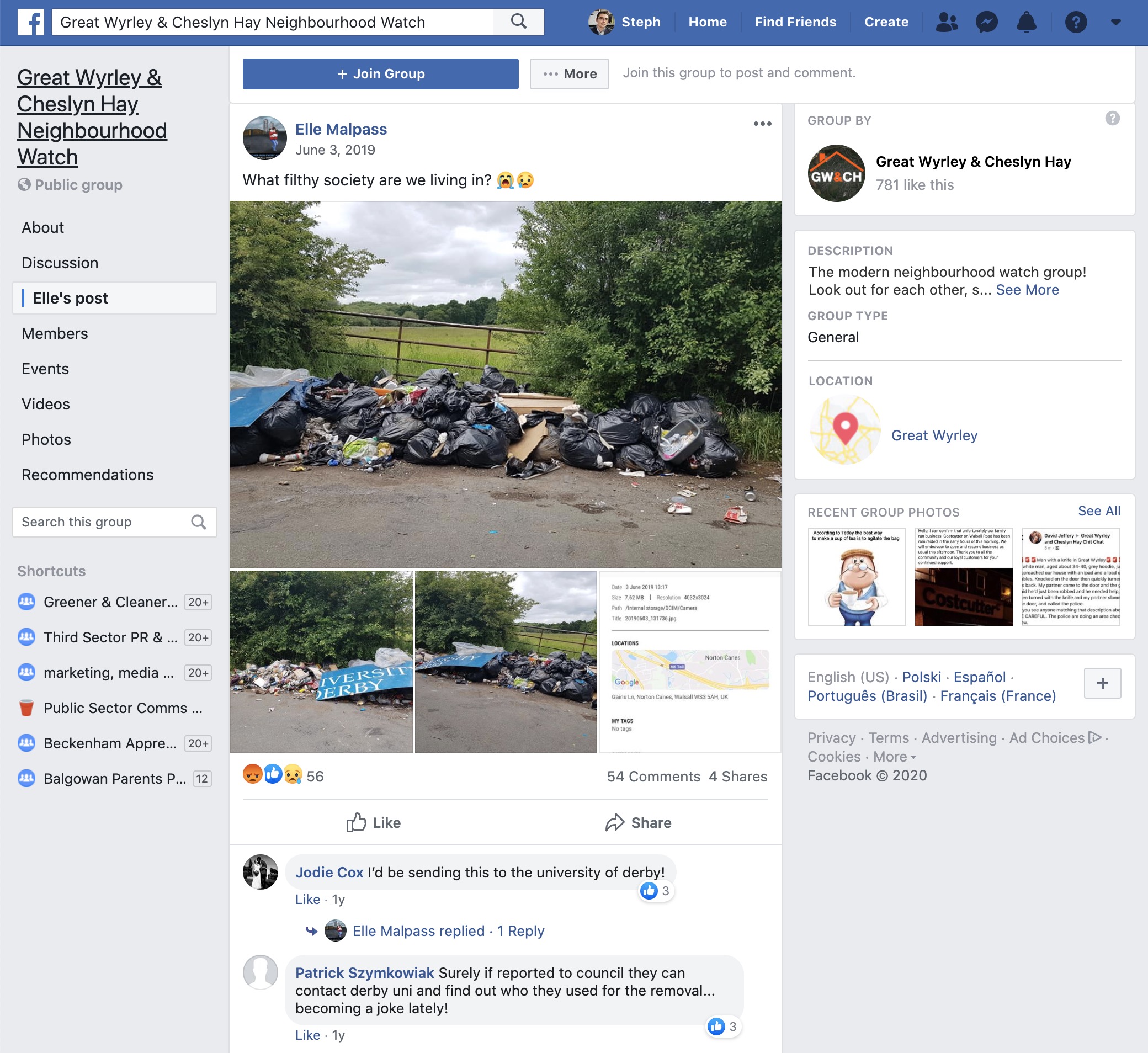 Here’s a lovely example of that in action: a thread about flytipping kicking off in a group, with an awkward photo of a University’s advertising hoarding amongst the unsightly rubbish. But a respectful tone and clear commitment to keep the group posted quickly won respect from the community. “I was expecting to be eaten alive but folks were grateful and appreciative” the university comms person told me. 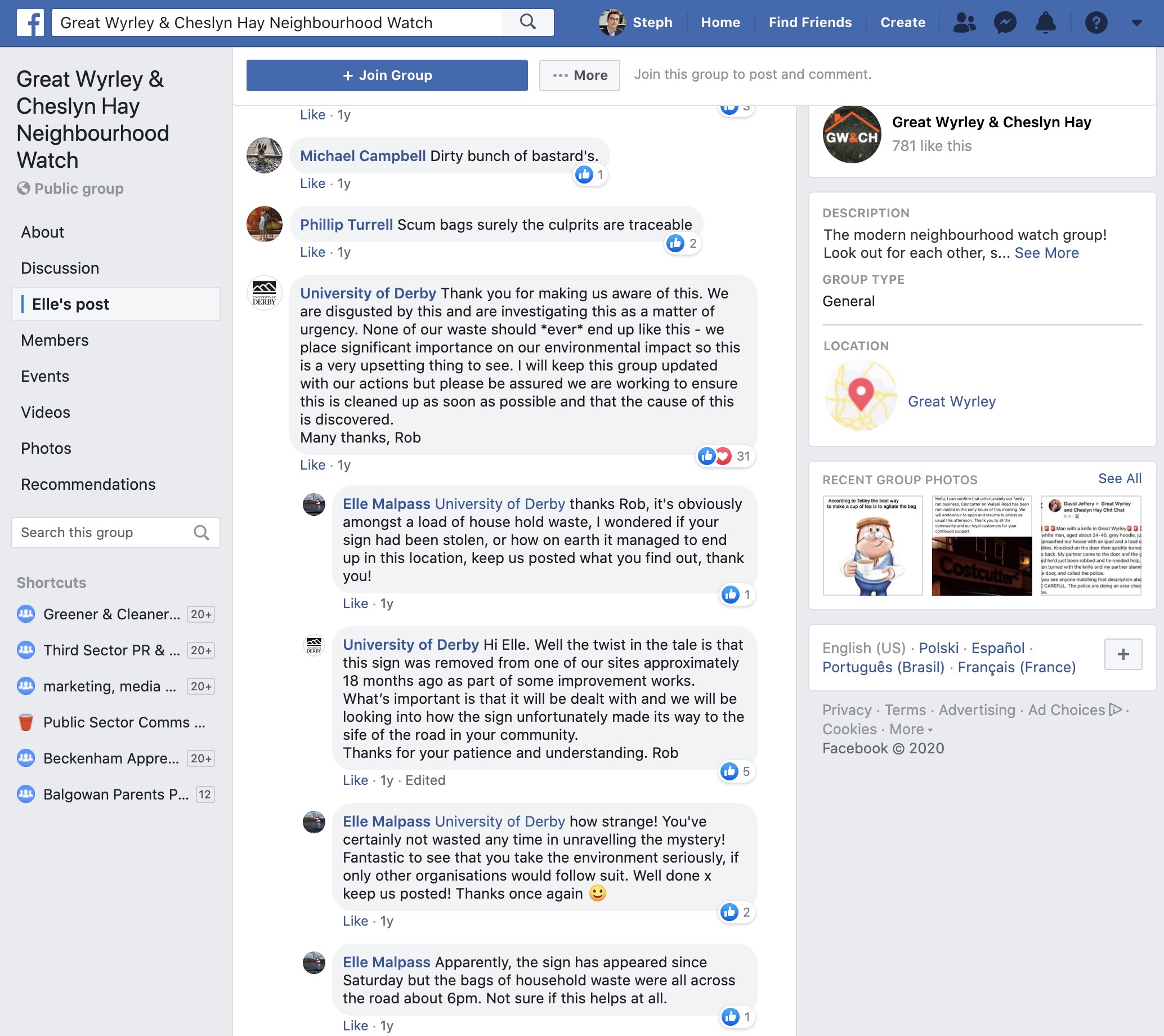 While a lot of this advice might have been equally relevant ten years ago, one thing that’s certainly new is the challenge of finding what’s out there and being able to see it, since so many more online discussions are in private groups and chats these days.

Private doesn’t mean invisible through – you can still find many relevant Groups using regular search or great tools like CrowdTangle https://www.crowdtangle.com/, which tracks how public information gets shared and used within the Facebook ecosystem.

As long as you have a justifiable rationale for joining and commit to contributing openly and constructively, you’ll often be able to join them too. You won’t find the content neatly sliced and diced in social media monitoring reports, but then they’re of limited value here: the goal is to reaching out to establish a presence and trust with relevant communities online, where the effort invested in becoming a trusted member is repaid in the value the group brings to you. That’s bound to take some trial and error, but it’s worth doing.

3. Getting the tone right: stakeholder relations, not customer service or corporate comms

As an earned space, the tone when engaging with a Facebook Group may need to be somewhat different – or at least more flexible – than you’d use on a corporate channel.

As a relationship-building process, earning a place in a Facebook Group takes time and a certain amount of humility towards the existing members of the community. That’s particularly true where you’re trying to delicately correct a misconception or explain a failure of your organisation. Be clear, open and generous when you engage.

Journalists are doing this pretty well already – like this Dutch reporter looking for people to talk to about COVID in Sheffield: 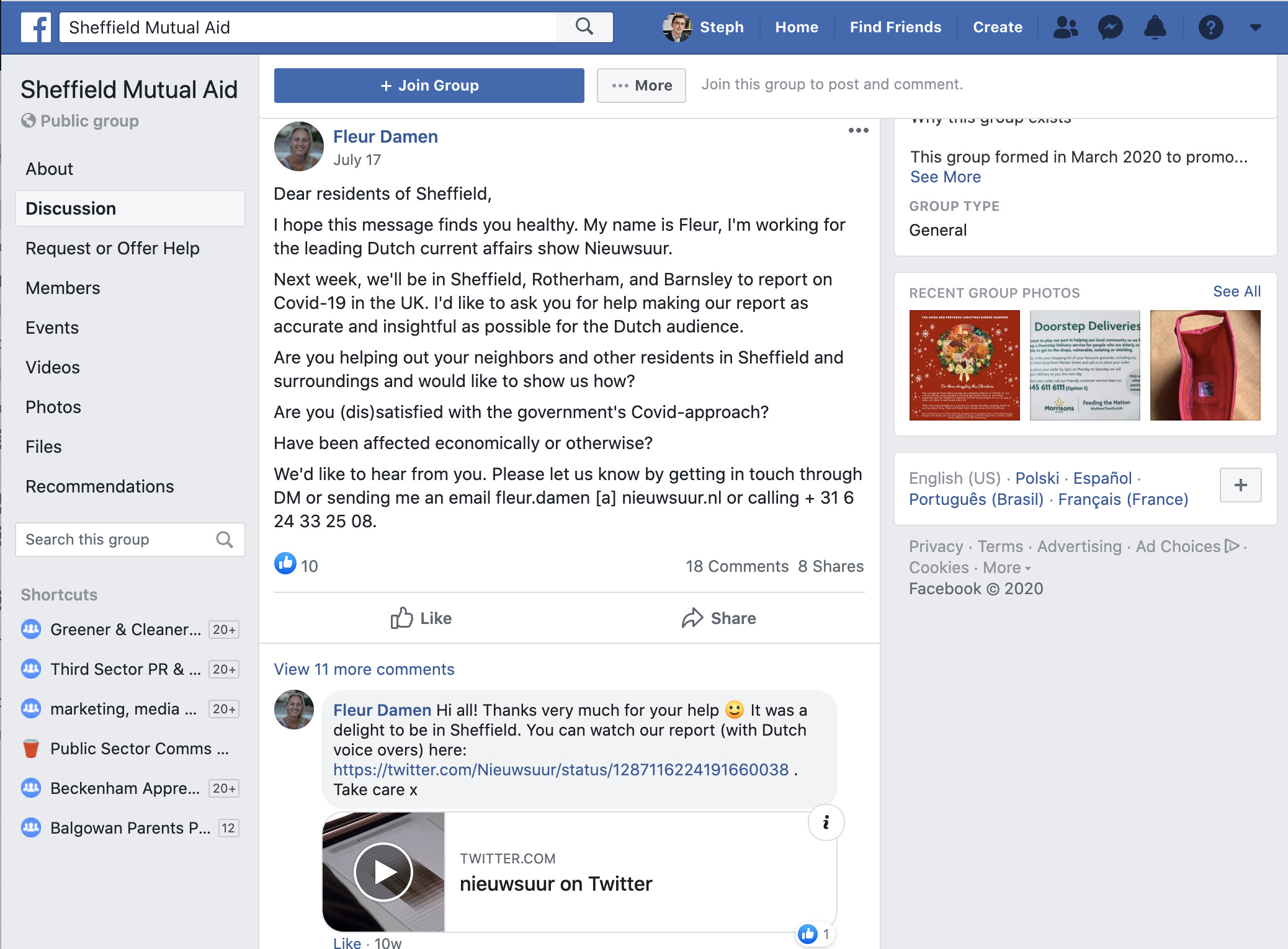 As one member of the Headspace group told me:

“I’ve infiltrated a lot of our community groups, explained that I’m from the NHS, not selling or spamming etc. I always make sure my posts/content is adapted to their local community rather than generic Comms. I am also admin on the groups where I live which is helpful.”

A frequent mis-step we see in our crisis simulations is organisations simply copy-pasting a corporate statement into a community group. That’s not likely to go down well – even if you have the posting rights to do so. There’s a valuable opportunity to talk directly to your audience and avoid the facts being twisted by media into an us-vs-them narrative if you can show you’re taking the time to tailor your message and engage rather than shout.

4. Engage constructively with moderators and leaders

As Groups have gained visibility in newsfeeds, the importance of group moderators has grown hugely. In most Groups, the admins will be very influential in terms of what is posted and how it is received, so it’s important that you engage them sensitively. You might find a private message to an admin explaining that you’re trying to correct a misunderstanding will help you get that correction presented to the group with their blessing, or let you bypass normal rules on posting by new or commercial members. Plus, remember the power of self-moderation: contribute evidence and links not purely a rebuttal or statement, to help group members work out for themselves what to believe and how to bust myths.

It’s sometimes difficult to know whether to address misunderstandings in a Group directly or signpost to the truth elsewhere. This example from the Forest of Dean involved the comms officer reaching out to the group admin, for them to share the real story into the group and take some of the heat out of a gnarly planning situation without getting inappropriately informal:

5. Deploying your trusted voices into groups

We talk a lot about ‘trusted voices‘ at Helpful – individuals within your organisation who have real credibility online, and can say things the corporate account simply can’t. Organisations like the Environment Agency and Radioactive Waste Management Ltd do this really well, using scientists or frontline staff to show, not just tell.

Where it’s appropriate, trusted voices with professional credibility make great members of niche communities such as local or specialist Facebook Groups. You’ll need to support them to set the right expectations in situations where group members are asking tough questions or expecting urgent answers.

In our crisis simulations and workshops, we’ve increasingly been playing issues into simulated Facebook groups to try to recreate some of the same conditions. We help teams work through their strategies for dealing with difficult news across the domains of corporate channels, media relations and community engagement.

So far, we’ve not yet seen many teams comfortable handling community groups well in our simulated environments. As Facebook Groups continue to grow in influence, we’ll be keeping up the gentle encouragement to work on this skill – and the confidence to use it in the real world.