Nine things we learned at #CommsCamp

We like Commscamp. A couple of hundred interesting public sector comms people in a lovely rambling building by the Birmingham & Fazeley canal, run on traditional unconference principles: no fixed agenda before the day, anyone can pitch a 50-min session, and the “law of two feet” applies (i.e. if a session is boring you, feel free to go to another one). 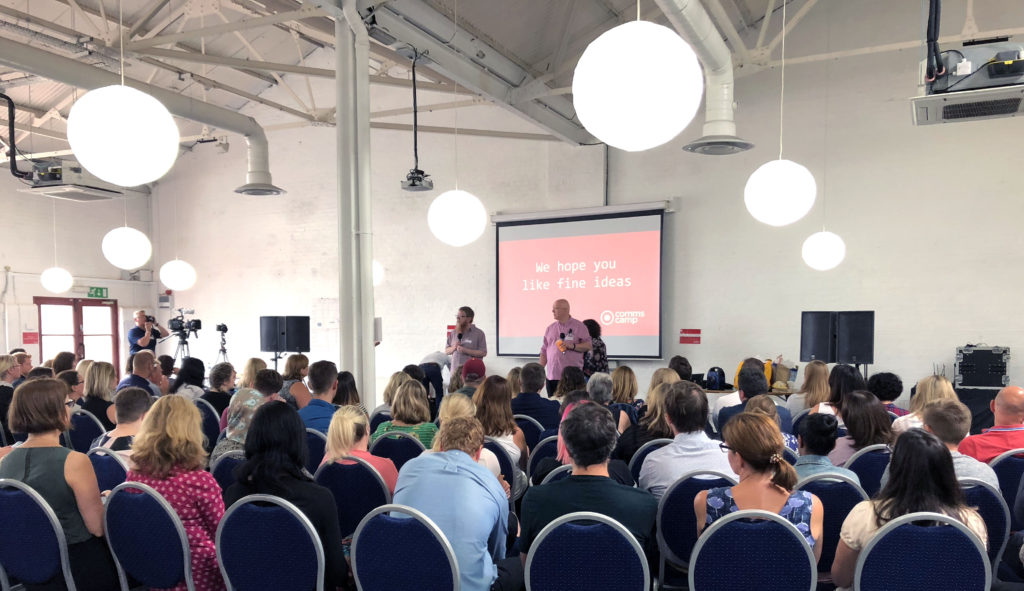 Kate and Steph were there since Helpful was a sponsor of the event (enjoy the lollies, Commscampers!) and here’s nine things they learned:

1. Easy read (and accessibility) is a thing you do, not a box you tick

I’ve got the principle of accessibility web design OK (semantic structure, resizable text, text alternatives for images) but haven’t delved much into accessibility for users with learning disabilities. It struck me there maybe more kitemarks and standards in the world of accessibility than are strictly helpful, which encourages ticking boxes over thinking sensibly about making content truly usable by lots of different people – subtitling your videos the right way is good for Google juice, people on trains and deaf people.

2. Email newsletters are Encyclopaedia Britannica in a world of Google queries

In the post-apocalyptic world of GDPR-compliant email lists (as in so much of life) it’s not how big it is, it’s what you do with it that counts.

Dave Worsell of Granicus was telling me how their most successful clients get engagement from keeping emails campaign focussed: one thing, a clear call-to-action, to an engaged list. Rounding up a months’ worth of ‘news’ into an email newsletter is 20th century, print-based thinking. Pixels and emails are cheap, and attention is expensive now. Send more, shorter, better emails.

In a session on engaging local communities around consultations, Helpful alumnus Al Smith talked about engaging in local community groups and pages online, and various people shared stories of inviting skeptical stakeholders to physically experience changes – the ringside seat approach still wins people over. Twitter chats too are still going strong, and here’s a massive list of regular chats if you’re looking for a community to tap into.

4. Dave Throup of the Environment Agency is still going strong too

We’ve used the example of Dave Throup, Environment Agency manager in Herefordshire and Worcestershire, for some years in our training courses. Highly visible, engaging, professional and human on social media, he’s a trusted voice in good times and bad. 14,000 followers and six years on, he’s still showing that communicating about your job on social media can just be part of doing your job well.

5. Customer service is about courage, co-ordination, channel shift and caring

We pitched a session on customer service, and I really enjoyed the discussion we had, hearing from some of Commscamp’s quieter voices. Some faced huge cuts, political opportunism, regular abuse, and challenges getting customer issues resolved. Doing it well seemed to boil down to:

6. Defamation and all the legal stuff is important online

Attending this session led by David Banks was like going back to journalism school. The same principles apply: don’t say the wrong things, or risk getting sued. If a post or tweet is wrong, deleted it and apologise quickly. But before you delete it, take a screenshot of the metrics to show the reach up until the post was taken down. If it makes it to court, those metrics will come in handy.

If you, or an organisation retweets something, you are just as liable for publishing the content as the original source. In short, the line of ‘likes and retweets aren’t endorsements’ in a Twitter bio isn’t going to be enough to hold up in court, so be sensible with what you promote.

Trust is earned by being authentic and behaving appropriately. As one person in the session said, ‘You can’t communicate yourself out of something you’ve behaved yourself into.’

Survey results by Edelman and Ipsos Mori show professionals such as scientists, nurses and police are seen as some of the most trusted people by the British public. Politicians and journalists are seen as the most untrustworthy.

Instead of being the big scary elephant in the room, podcasts were revealed to be a cheap and easy comms piece to create. Yes they take time, but creating podcasts doesn’t have to be a long-term commitment.

Starting out with a six-part series about a particular topic is okay – perfectly normal, if you will. Recording a clip on a smartphone is fine (although the audio quality can be improved by using an inexpensive lapel microphone) and content can be hosted on sites like Soundcloud for free. Adding audio to Apple Podcasts is quite straightforward and is also free.

9. Evaluating is important (and is more than red and green sentiment graphs)

Evaluating projects can be a long and challenging process to undertake. Measuring a change in an audience’s behaviour can take years, and sometimes even that data is hard to trace.

However challenging, it was unanimous in the room that evaluating work is important. We discussed how ‘Vanity metrics’ such as AVE are not the be all and end all, as much as the powers above sometimes feel they are.

We were also in agreement that the success of a campaign shouldn’t be based on the volume of interactions, but on the impact the work had on the audience. Which is why it’s so important to evaluate if the audience understood the campaign and, if not, what needs to be done differently next time round. Finding shortfalls is actually a good thing, because it allows us to be better.

Big thanks to Dan, Emma and the other organisers and volunteers. It was brilliant. See you next year.