As sexual harassment scandals continue to engulf corporate America, how should your organisation be preparing?

It’s unsurprising that we’re being asked by leaders from some of the world’s largest companies to help them run their teams through training workshops and simulations based on the #MeToo scenario impacting their business.

As shown by the recent case involving Nike – which has now fired over half of its executive team due to the ongoing fallout over allegations of “conduct inconsistent with Nike’s core values” – no company can afford to adopt a ‘wait and hope’ strategy.

The best form of crisis management is crisis prevention

Don’t wait for the dreaded phone call from a reporter looking for comment, or for the #MeToo + @[your company] tweet to appear. As custodians of your company’s reputation and strategic interests, you need to be proactive in managing the issue and ‘doing the right thing’, even if it does only constitute a ‘potential problem’ at this stage.

Two key questions you need to be asking yourself now are:

Never assume ‘it’ll be alright on the night’

You need to rehearse how you will respond should the worst happen. Well we would say that, right? But that doesn’t make it any less true. You wouldn’t try to act out a play without rehearsing the script beforehand, so don’t assume that you’ll ‘know what to do’ when a crisis hits – make sure that your processes and people are ready to go should they be needed.

Five key questions you should be finding answers to – through rehearsals – are: 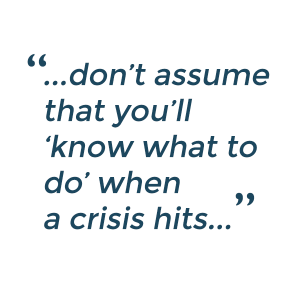