Many of the graphics, colour schemes and phrases we see on a daily basis are owned. Trademarking the features that make a brand unique is a way of preserving its identity and giving it an edge of exclusivity. A successful trademark is recognisable, relatable and for want of a better word, desirable to both fans and critics.

But is there a limit to what can be trademarked? At what point does something become too common, making it not feasible or fitting for it to be exclusively owned? I’ve realised the simple answer to that question is unsurprisingly; money.

This week the United States Olympic Committee announced the trademarking of the #Rio2016 hashtag for only the use of corporate sponsors. 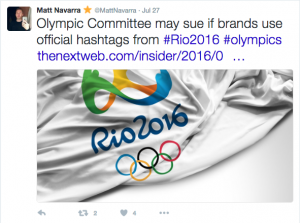 Interesting. The official hashtag of one of the biggest global events has now been privatised. I understand the logic behind the decision. Sponsoring the Olympic Games would be quite expensive and those who do pay the premium price for being associated with the Games should receive a level of exclusivity as payment in return. That’s fair. But the official hashtag?

For me it feels like that’s taking it too far. My reasoning for this is pretty simple: it unearths the original purpose of a hashtag. In its purest form, a hashtag is a means of collecting like themes. This allowing, in theory, for posts to be searched and found among like others using the same hashtag. It’s kind of like a neat online filing system where a montage of thoughts are kept together in one place.

But if tagging a post about the Olympic Games with #Rio2016 risks a non-corporate partner being sued, then they are hardly going to use it, are they? This will lead to the invention of another similar tag, or not tagging related posts at all – with both of these outcomes violating the essence of hashtagging in the first place.

Will the privatising of the #Rio2016 hashtag impact an ordinary person? Probably not. But that’s not really the point. It’s the precedent – the start of a potentially very slippery slope where a common practice that billions of people do every day is revolutionised by brand exclusivity (or, money). Maybe that’s okay, maybe it’s progression and as social media users we will adapt to the new rules of this digital marketing landscape. Change after all, is inevitable. I’m just not sure I’m there yet.

Editor’s Note: Pro-Aussie views are strictly the writer’s own. Ahem.